Teenage Kicks at the Stedelijk 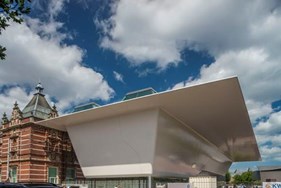 Teenage Kicks at the Stedelijk

In August I was asked to lead a private tour for a group of teenagers at the Stedelijk, a museum of modern and contemporary art and design in Amsterdam. This was to be a small group of participants aged between 11 and 18 years old. All of the group were German, but some lived in Amsterdam and went to a local international school, whilst others were visiting from Berlin where they attended a bi-lingual secondary school. The tour would be in English but all of the group were non-native English speakers. Two of the group would also need help with translation from other members of the group. I had no further information about the group – whether they liked modern art, for example, or even wanted to come and visit the museum.

This was my task – to put together an exciting tour of the museum that appealed to a diverse age-range and non-native English speaking group of teenagers. No mean feat. Luckily, I like a challenge, particularly one in a museum.

Since the Stedelijk has re-opened, with it’s wonderful and sometimes controversial new bathtub extension, I have visited many times. I love the ground floor with its chronological layout of modern (pre-1950) art and the wonderful and often-overlooked design collection. However, I was drawn to the defiantly non-chronological layout of upstairs and decided to base the majority of my tour with the post-1950 collection here, with some time later to visit a temporary exhibition in the Design wing and a final creative exercise in the Family Lab. So far, so good.

At this point, I should mention that my group was accompanied to the museum by a large group of parents and extended family, who were were taking part in a wonderful private art history tour at the same time as my tour. Our tour of the Stedelijk was to be slightly different. I use thinking routines and inquiry methods to enter into discussions with my groups. We always start with some slow, careful and quiet looking at the object or artwork in front of us. Then I like to ask the group to describe what they are seeing, before we move on to trying to interpret the object or work of art. At different works, I use different routines depending on the kind of thinking I am trying to elicit. As and when necessary, I sometimes add contextual information to extend the discussion. The aim is to always use open-ended questions to open up the discussion and make the whole group ready and able to contribute.  It’s like a mini-culture of thinking for the duration of the visit. How was this achievable? Let’s look at some of the art works that we got to know…

instead of giving the group an introduction, I asked the group what they already knew about the Stedelijk and what they would like to know. From their prompts and questions, we talked about the renovation of the building and re-opening of the museum. I asked them to look closely at and touch the handrails on the famous stairs of the old part of the building. We talked about how these were the only things that had been untouched in the whole renovation of the building. They then came up with reasons as to why they hadn’t been replaced with new ones. They also asked about the wonderful neon lighting and we discussed the mood it created and the intended tribute to Mondriaan by the artist Dan Flavin.

We walked to look at the Sol LeWitt wall drawing and spent some time appreciating just how large this work really is. After describing the work in detail (What do you see? Can you describe it more? What else is going on?), I told the group a small amount of information about conceptual art and how LeWitt wrote a set of instructions for each wall drawing which were then handed over to assistants to complete the work.

This led to an animated discussion within the group about who the artist is – is it the person who comes up with the idea? Or the person who constructs the work of art? Does the artist have to make their own work? Is it still art if someone else makes it? We then took a vote as to who was the author of this work.

I then walked the group into the large room containing Barnett Newman’s Cathedra and set them a challenge as to how long we could spend discussing what is largely a blue painting with two stripes on it (their words). Although this painting can be ‘seen’ very quickly, it is only when you spend time looking that you can appreciate it’s impact. Again, this is a strikingly large painting, with hidden depths of colour that cannot be appreciated with a short glance.

This painting also has a very interesting history as it was attacked in 1997 and was painstakingly restored for more than 4 years. This led the group to an interesting discussion as to why anyone would attack a painting and in particular this painting? (In the end we spent 15 minutes here, discussing Cathedra which surprised the group).

By now, the group were well in their stride and excited to see the next artwork. I wanted to show the group some photography too and the group were drawn to the Rineke Dijkstra photographs of children and teenagers in lush park settings. They immediately noticed the facial expressions of the subjects (rarely smiling). We also visited the Allan Sekula triptych that were newly on display following the artist’s death in August. Three photographs are mounted on the wall, supposedly telling a story. The group was divided into three and each group had to describe their photograph and tell the story. What the group was unaware of, was that the table and chair in front of the photographs is intentional and the red book on the table is in fact an essay by the photographer revealing possible meanings of the photographs and their relation to each other. One member of the group started to read the essay and share some of the information with the group. This led us to think about what photographs actually reveal?

The group had worked really hard to get to this point and had all contributed (even the two non-English speakers) but I could tell that it was time for a change of pace and mood. We went downstairs to the fantastic and mesmeric Touch and Tweet exhibition in the Design wing of the Ground Floor. This comprises three interactive installations, Dune by acclaimed designer Daan Roosegaarde and two by London duo Hellicar and Lewis. Dune is an interactive corridor of light that responds to movement and touch and delighted the group. Feedback is an interactive mirror-based installation, much along the lines of a hall of mirrors. The software changes and manipulates your image in response to your movements which generated a great deal of dancing from the group!

A final activity to ward off museum-fatigue took place in the Family Lab where I handed out instructions for every one to create their own Sol LeWitt wall drawing as a memento of their trip. As they worked away, I chatted to them about their thoughts on the tour. I had worked hard to put together a tour that looked at a large variety of art works in different ways. I wanted the group to feel they had worked together as a group to make the tour what it was and above all, I wanted them to feel excited and inspired to return again to this or other museums.

Thankfully, all of the group were overwhelmingly positive and enthusiastic. They loved the museum, loved the art and loved being able to talk about their thoughts about what they had seen. All of the group left with a page of links to info, apps and interesting videos about some of the artwork they had seen. At the end of the tour, one of the grandparents came into the Family Lab and heard about what we had been doing for the last 90 minutes. As he left the room, I heard him say, “I wish I could have been on your tour…!”

If you are interested in booking a bespoke private museum tour for corporate, school or personal groups, please contact [email protected]