Portrait Gallery of the Golden Age: What Not to Miss

The Portrait Gallery of the Golden Age: What Not to Miss

If you can’t get enough of Dutch Golden Age art at the Rijksmuseum, the Hermitage Amsterdam is a wonderful additional option to expand your knowledge with the exhibition: Portrait Gallery of the Golden Age. 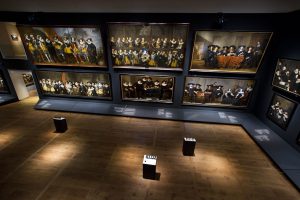 From late 2014 through to the end of this year, the Hermitage Amsterdam, in collaboration with the Rijksmuseum and the Amsterdam Museum, is hosting an array of portraits from the Dutch Golden Age, including some of the oldest civic militia portraits from the period. A Squad of Civic Guards (1529) by Dirck Jacobsz. is the oldest in the gallery and features civic guards who appear far different from the likes of the men in Rembrandt’s (1642) The Night Watch, which is displayed in the Gallery of Honour at the Rijksmuseum. These older civic militia portraits reveal the typical way of painting civic militia portraits. The men are lined up in efficient rows in a manner that equally displays all of their faces. Furthermore, seeing these civic militia portraits grouped together in a hall more accurately recreates the way they would have been hung at the time. During the Dutch Golden Age, there were 20 districts in Amsterdam, each with its own civic militia. The Night Watch, along with at least seven other civic militia portraits, would have hung across from and next to one another in the Arquebusier’s headquarters; thus, viewing these portraits together at the Hermitage Amsterdam is almost a glimpse of what it would have been like to view these paintings back in the 17th century.

Highlighted in this exhibition are thirty so-called “brothers and sisters” of Rembrandt’s The Night Watch. These additional thirty paintings help to give more context to the importance of group portraiture during the Dutch Golden Age, especially as these portraits were not limited to civic militia portraiture and that their function was often to display wealth and justify status in a society that largely lacked royalty and aristocracy as a means of establishing hierarchy. One example of these paintings is The Governors of the Binnengasthuis (1617-1618) by Cornelis van der Voort, which is the first portrait of a group of governors of a charitable institution. Such a painting can be compared with Rembrandt’s The Syndics, which can also be seen in the Gallery of Honour at the Rijksmuseum. As with Rembrandt’s painting, Van der Voort positions his figures around a table in order to demonstrate their administrative skills, which were important for the governors of these guilds and organisations. During this time, nearly everyone (except for the very poor) belonged to some sort of organisation or guild, but some were hierarchically more esteemed than others, demonstrating the wealth and status of its governors or board members. The surgeon’s guild was at the pinnacle of the hierarchy of guilds and Rembrandt’s The Anatomy Lesson of Dr. Deijman (1656), not to be confused with his famous The Anatomy Lesson (1632) at the Mauritshuis, depicts the Surgeon’s Guild in Amsterdam performing its annual autopsy.

However, unlike the paintings displayed at the Rijksmuseum, many of the group portraits now featured at the Hermitage Amsterdam emphasise the importance of charity and social welfare during the Dutch Golden Age, both as a means of structuring society as well as a means of supporting the Netherlands economically. In other words, as with civic militia portraits, getting oneself painted as the governor of a charitable institution was a way of expressing one’s status and wealth in society. The people depicted in The Governors of the Binnengasthuis, for example, paid approximately 318 guilders each, which is equivalent to nearly 4500 euros in today’s currency. Obviously, these people had to be quite wealthy to have themselves included in these paintings, which would often then be hung in public places to further parade the subjects’ wealth.

The significance of these charitable institutions during the Dutch Golden Age also indicates the relatively high level of social welfare in the Netherlands compared with its European counterparts at the time. These social welfare institutions, such as hospitals for lepers or orphanages for children of victims of the plague, were often seen as economically responsible: social unrest was deemed as negative for the economy.

The Portrait Gallery of the Golden Age at the Hermitage Amsterdam is structured in such a way that allows visitors to follow the narratives of four residents of Amsterdam at the time, revealing the struggles of these people in attaining power and status in a time of social and financial mobility that was nearly impossible in other societies dominated by royalty and aristocracy. The entire exhibition is worth consideration, but the Anatomy Lesson of Dr. Deijman and the hall of group portraits (mostly featuring governors of social welfare institutions) are unmissable in this exhibition.

The Hermitage Amsterdam is located at Amstel 51, it is open daily from 10.00-17.00, with a ticket price of 15 euros for adults and 5 euros for children aged 6 to 16 (children under 6 are permitted free admission). For a custom private tour of the exhibition, please contact us.