Stories Around the World – Interview with Claire Bown 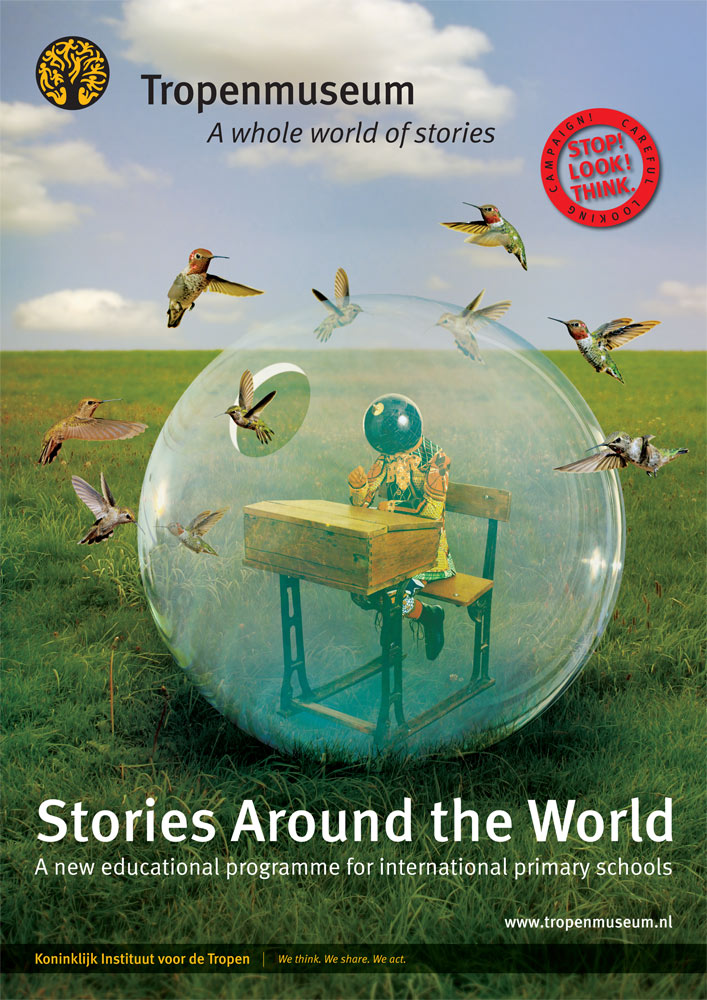 If you are interested in the story behind the programme for international schools that I developed at the Tropenmuseum in 2011, here is an interview I did for the Tropenmuseum website at the time.

Interview with Claire Bown, developer of Stories Around the World.

Claire, can you tell us a little about yourself and on how you got involved in this project? Whose idea was it to develop a programme for international primary schools?

In 2010, I started a Masters Degree in Museology at the Reinwardt Academy in Amsterdam. In the second part of my course, I was required to take part in an internship at a museum. At that time, I knew that there was a definite need for more educational resources for school groups in English at Dutch museums. I had spoken to many teachers who had expressed the desire to bring their pupils to new and more relevant museums. Some museums were offering some school programmes in English, but these were typically a guided tour with an English-speaking guide or a translation of an existing worksheet. No-one was offering a schools programme specifically made for the large amount of international schools in the Netherlands. So, I wrote to the Tropenmuseum to see if they were interested in letting me create a proposal for a new educational programme for international schools as part of an internship. The museum liked the proposal so much that they hired me in November 2011 to research, design and deliver the new programme, now called Stories Around the World.

Why did the museum and you choose to use the Stop. Look. Think! approach?

This new approach is called Stop. Look. Think! and is composed of five principles that aim to encapsulate everything that Stories Around the World represents. These include the slow, careful exploration of objects using open-ended questions, the development of key critical thinking skills (e.g. observation, reasoning) and the fostering of a community of learners who all feel happy, willing and able to contribute to the discussion taking place.

Stories Around the World uses thinking routines (from Visible Thinking) to achieve the aims of Stop. Look. Think!. Originally designed for the classroom, these flexible, easy to use, mini-strategies were adapted for use in the Tropenmuseum. They provide a structure for student-led discussions and encourage the exploration of ideas. They also help to spark curiosity and provoke debate about the Tropenmuseum’s collection. The Stop. Look. Think! principles demonstrate that this way of working with student groups is not just a strategy; it is about embracing a new way of thinking and learning in the Tropenmuseum.

Is there a difference in approach between what the Tropenmuseum offers Dutch schools and international schools?

I wanted to choose a theme that was relevant to all international primary schools regardless of what curriculum they follow. Stories and storytelling is something that occurs in many forms and subjects across the primary years and was an obvious choice. The aim is to supplement and complement the curriculum whilst also concentrating on developing key thinking and looking skills. I also wanted to create a link between the international outlook shared by both international schools and the Tropenmuseum, so the emphasis is on world stories. The aim is also to encourage the slow, detailed exploration of objects by the students. We are interested in their observations, interpretations and ideas. Therefore, students explore just four objects carefully with the museum teacher. The thinking routines allow students to spend more time looking closely at objects – less really is more!

What is your most memorable moment while working at the Tropenmuseum on this project?

We held a High Tea Afternoon for International Schools last October to introduce Stories Around the World and it was great to meet so many enthusiastic teachers and share tea and scones with them! Afterwards, I received some lovely thank you messages – this one has stuck in my head: ‘The program that you have developed at the Tropenmuseum is by far the most relevant I have seen for my students in the Netherlands. The storytelling links directly to one of our units of inquiry and the thinking routines are imbedded in our program and philosophy of learning here at school. I think that student understanding will certainly be enhanced by experiencing the new program’. I have many fond memories of working at the Tropenmuseum – a wonderful museum filled with a whole world of fascinating objects!