In today’s solo episode, I’m talking about ways to work with objects that you might find ‘boring’ or uninspiring.

I’m sharing how we can use slow looking to learn to love objects that we might otherwise overlook or reject. And how we can get our visitors and participants excited by these types of objects too.

I had a chat recently with a fellow educator about how we can work with objects that we don’t instantly feel attracted to, objects that leave us uninspired or those that we, gasp, might even find boring.

Sometimes in our work as educators, objects or artworks are imposed on us – as part of a guided tour or educational programme – and we have to learn how to work with them in our own way.

It could just be that we don’t feel any connection to this object. At all.

So we may have to work with a painting or sculpture or object that we don’t like because it’s part of a guided tour or an educational programme or because it’s a ‘highlight’ of the collection.

BUT.
I think visitors can tell when we’re not excited or enthusiastic about something. And even if they can’t, it’s much better to be enthusiastic as that energy is contagious and will transfer to your participants.

Equally, every museum or art gallery has its superstar or highlight objects. These are the objects or artworks that get far more attention than others. They are usually well positioned, even spotlighted and quite often have a space all to themselves.

So, as much as this episode is about how we as educators, guides and docents can learn to love so-called ‘boring’ objects, it’s also about how we can get our visitors to love objects that are less well known too.

How can we get visitors interested in these less popular but still fascinating objects? How can we engage them with ones that may seem a little ‘boring’ or ‘mundane’ at first glance?

Today I’m sharing examples of two objects that only came to life for me once I had spent time with them. I hope the examples will provide some inspiration for you to search out the ‘boring’ and ‘mundane’ objects in your organisations, and to fully embrace them.

Spending some time slow looking with objects that you’re not immediately excited by will, I promise, transform the way you see them.

At the end, I’m sharing the key takeaways from these two examples and how they can teach us to love boring objects.

A few years ago,  I took a Dutch bean slicer (or snijbonenmolen) in my suitcase to the MuseumNext conference in Geneva. I was leading a workshop there on using Visible Thinking for creating dialogue with objects. I had already selected a painting for discussion, but wanted an object I could use to demonstrate how you can use thinking routines to generate lively discussions about ANY type of object.

This wonderful object was chosen from a special room, a real cabinet of curiosities, from the museum studies department at the Reinwardt Academy in Amsterdam. All the objects in the room were collected by the late Nico Halbertsma for students to use to create museum tours and learn about object-based learning. I chose this object, not just because I was fascinated by it, but because I believed it told stories on multiple levels.

At the same time, I was intrigued as to how long we could spend discussing such an ordinary looking everyday object using the thinking routine See-Think-Wonder. You can see from the photo that it’s not the most beautiful of objects.

It’s well-designed, yes, but not a thing of immediate beauty. Or was it….?

We started by looking at it from all angles. From above, from below, from the front and from the back.

After looking at it for a while, participants could then handle the object and examine its moveable parts. I invited members of the group to start describing the object. They noticed it was brown, made of cast metal, with a handle that turned, and sharp blades on the other side.

After we had finished describing it, we started talking about what we thought it could be. Due to the handle and the sharp cutting blades, the first thoughts were to do with cutting and sharpening implements, possibly pencils, and grating or cutting vegetables.

The group worked collaboratively building on each other’s ideas until they had almost unilaterally agreed that it was a device for cutting some kind of fruit and vegetable.

When would you use it?

We then moved on to think about why anyone might need such a device and when they would use it. One of the group members suggested that it could be from the mid-twentieth century and therefore it might have been a labour saving device. Someone else (who was Dutch-born) said it reminded her of something her grandma had in her kitchen to chop green beans (‘snijbonen’ in Dutch).

‘But why would anyone want all their vegetables the same size and shape?’ someone else asked. ‘What exactly is wrong with irregularly chopped vegetables?’

From time to time, I added small amounts of contextual information to pursue different lines of inquiry and to keep the discussion fluid. I frequently asked the group to provide evidence for their interpretations (‘What do you see that makes you say that?‘) and pushed the group to explore all possibilities and look for any connections they could find.

In the end I had to wrap up the conversation, although most of the group still had more to say. I reflected with the group about the different levels of meaning that we had uncovered about the object – functional, symbolic, personal and historical – through the simple thinking routine See-Think-Wonder.

We had easily talked for 25 minutes about a Dutch bean slicer. Some members of the group had been skeptical at the beginning about the ability of such an object to hold our attention for more than 5 minutes, but all participants were enthusiastic and keen to contribute throughout. Their curiosity to find out more drove the discussion.

But here’s what was fantastic: the group wanted to carry on discussing this object, they didn’t want the discussion to end. They wanted to return and learn more with other objects. They left the workshop still curious and uplifted.

So that’s example #1. Here’s another story about an object that I wasn’t captivated by…

One of my favourite objects at the Tropenmuseum in Amsterdam is the Great Pustaha. However, I genuinely used to walk past this object without a second glance, until a colleague suggested I take a closer look. I’ll share a photo in the shownotes so you can have a look. 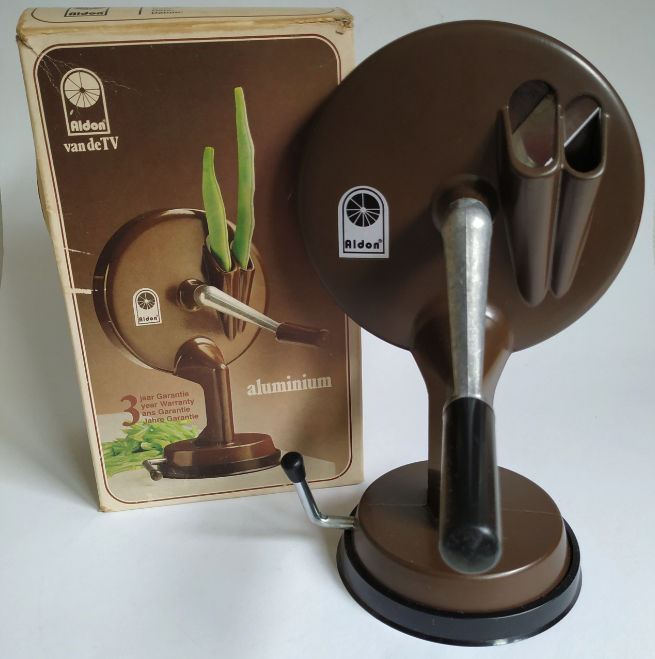 One of my favourite objects at the Tropenmuseum in Amsterdam is the Great Pustaha. However, I genuinely used to walk past this object without a second glance, until a colleague suggested I take a closer look.

It’s a brown wooden object, fairly large, it has 4 feet, what looks to be like a book without a spine above it, a decorated top with a mystical creature on top. It sits in its own display case.

So, I decided to take some time looking at it really carefully.

I did some research, I talked to the curator, I went back and looked again.

I discovered that the pustaha is an ancient book that was used by Batak priests in North Sumatra. These books were used by the priests as notebooks for recipes and healing remedies, for songs and notes on magic.

Although the Tropenmuseum has 150 of these pustaha in its collection, most of them have plain wooden covers. The rest are in the museum storage. Only this one is on display – why?

There are many other elements of mystery surrounding this object too – for example, why is there a handle on the top? How did the priest use the book? Did he read it or sing it aloud? If so, who was listening? And where did this take place? I’ve also never personally seen the book open which piques my curiosity further (although you can now view the beautiful pages inside on Google Arts and Culture).

This particular pustaha is unique because of its size, age and rich decoration. The text is written on tree bark that folds in a zigzag fashion, like an accordion. When the 56 pages of this pustaha are unfolded, it reaches almost 17 metres in length.

I’ve since spent hours and hours with this one object and shared its magic and intrigue with hundreds of visitors on guided tours and educational programmes – adults and school groups amongst them.

I always tell them that I used to pass by this object without much of a second glance….but the more time I have spent with it, the more I have seen. I know there are many, many stories hidden here in this one object. 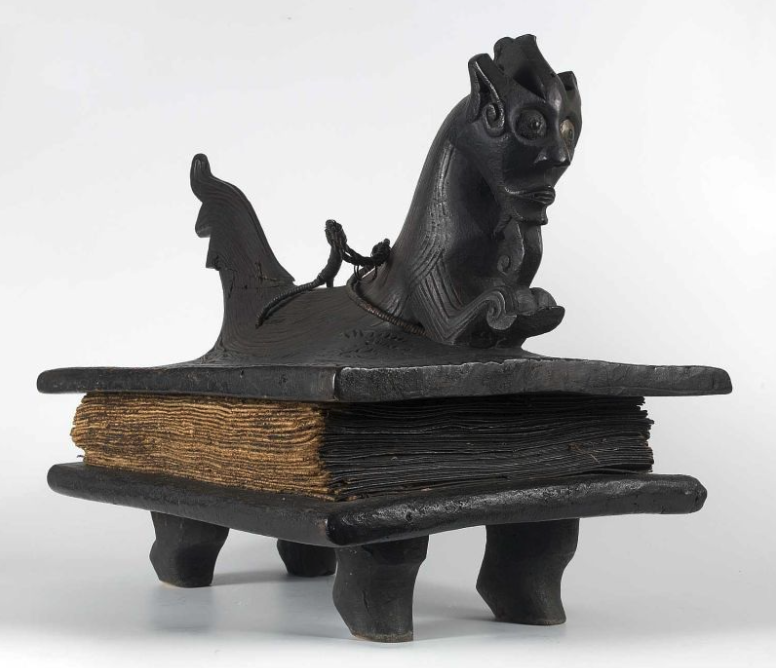 So what do these two stories tell us about how we can learn to love ‘boring’ objects?

Spending time looking at these two objects really allowed me to really focus on the questions and discussions I would like to have with my groups and to share with them my curiosity and enthusiasm too.

So, next time you are unsure about an object or artwork and find it dull, uninteresting or even boring, spend some time with it, looking and thinking about before you dismiss it out of hand.

I challenge you to go and find undervalued or ‘boring’ objects and work out how you could work with them in an engaging way.

And don’t forget my FREE new Facebook group The Slow Looking Club created especially for podcast listeners. It’s a place for conversation and discussion about engaging with art, objects and life slowly. I’ll share resources, ideas and tips for anyone interested in looking at art – whether it’s for your personal enjoyment or your practice as a cultural educator. And we’ll have regular slow looking moments together too! 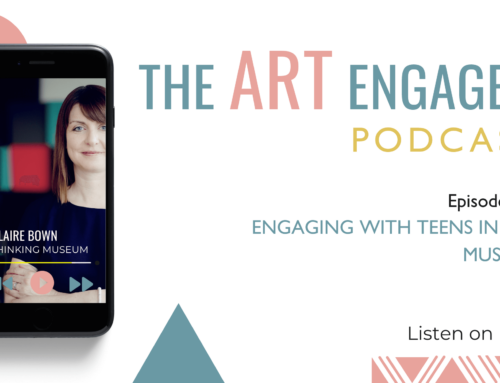 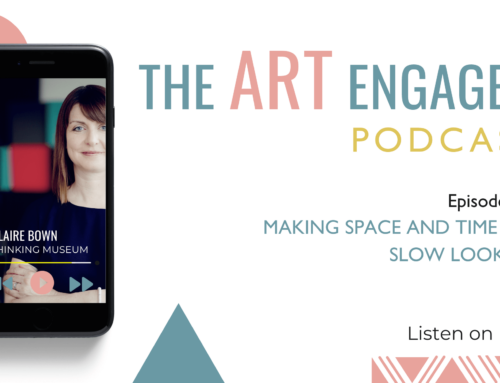 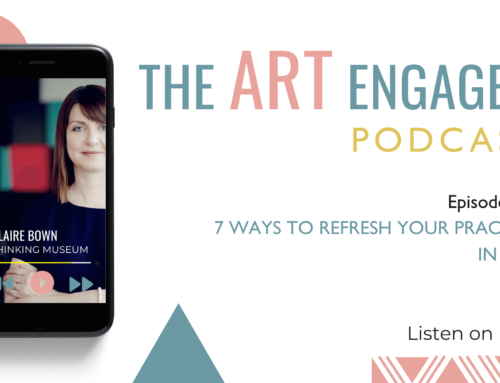 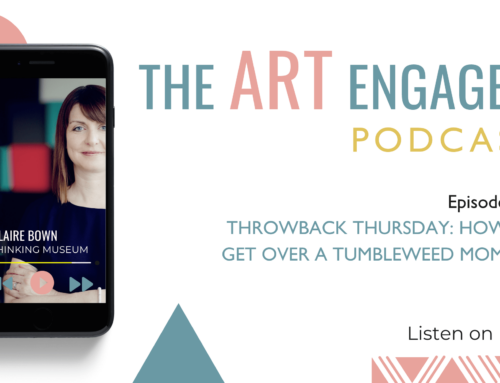 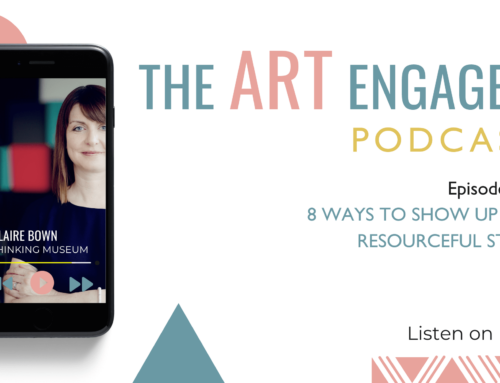