Thinking Outside of the Box with Play in the Museum

When we think of play in the museum setting, we often think of science museums where children can experiment with scientific concepts through play, or museums that are made specifically for children. With this perception, it seems that play has no role in the traditional art museum; how can we make play attractive for our younger visitors? How can we engage in play that’s appropriate for the museum environment? And how can we get  adults involved in play too?

First of all, we need to break down our understanding of what play is and what it can be. What’s the first thing you think of when you hear the word “play”? For me, it might be something like kids playing on a playground in a park; swing sets, sandbox, and all. Let’s break down this perception of play: the type of play that’s involved in this setting is very physical, but it is also limited to this specific place. What if we move the idea of play into a classroom? Certainly, play may happen in this setting as well; I fondly remember playing “Heads Up, Seven Up” on lazy Friday afternoons before summer break as well as playing word and logic games. So, “Heads Up, Seven Up” is another example of physical play — although a lot less reckless — althought word and logic games become more cerebral; this is typically the type of play we can engage in in a more traditional museum setting. 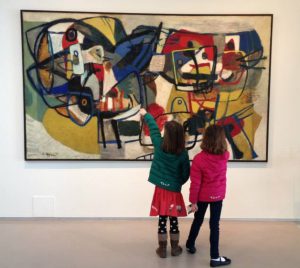 Play in itself is a fluid concept: it can be interpreted and applied in countless ways in countless spaces. In their compilation on museum education, Elliott Kai-Kee and Rika Burnham expand upon the idea of interpretive play¹. In their discussion of play in the art museum, interpretation itself becomes a mode of play: the conclusion is unclear during the process of interpretation; interpretive play “allows for the continuous emergence of unexpected insights and interpretations”². There is a fluidity to this process that allows for a playful approach in the art museum space.

There is, however, also the needs for a certain amount of structure to play. As Johan Huizinga, a Dutch philosopher and historian who is the thought leader on the conceptualisation of play, explains, play requires rules and it can often be very serious³. This also goes along with the oft-cited idea from Nina Simon (The Participatory Museum) that scaffolding is required in order to elicit effective participation in the museum space. Even as educators may guide interpretive play, they must also participate in it as well4. 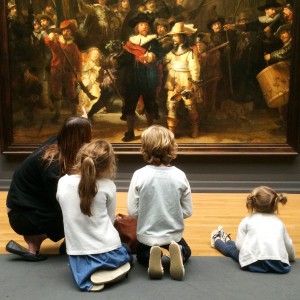 In keeping with these two qualities of play: anticipation and structure, play can be applied in museum learning activities in a variety of ways. Children can often become very serious in play. Think, for example, of playing hide-and-seek with a child who is dead-set on not being found; despite the giggles and joy, there is an element of seriousness to this play as well. On the other hand, play often opens adults and parents up to new conclusions and interpretations. Inquiry-based learning for adults can be difficult at times since they are sometimes wary of seeming unintelligent in their answers, whereas children are often creative and outspoken. Using play in the galleries can bridge these two, balancing the approaches of children and adults to create a blended and playful learning experience for the entire family.

So, to design playful activities in the galleries, educators must think of rules (these need not always be explicit) and anticipation (allowing for interpretations and observations without stifling this first with information). Visible Thinking can often be a way to accomplish these goals. For example, See-Think-Wonder can work for families when they’re split into pairs (adult-child pairs work best). As the pairs describe what they see, they learn that their abilities are valid; as the pairs describe what they think, they’re empowered with this autonomy; and as the pairs wonder about the art object, they’re encouraged to imagine the possibilities without being occluded by the educator.

Following Huizinga’s characterisations of play, one of the most important aspects is the immersive nature of it.