The Lucas van Leyden Altarpiece in the Rijksmuseum

Presentation in the Gallery of Honour at the Rijksmuseum is taken very seriously.  Only the most famous of Dutch artists are displayed here, often with their names adorning the arches and capitals of the hall when the museum was built in 1885, and again during its subsequent renovation from 2003 to 2013. Thus, each time a new piece is hosted in the Gallery of Honour, it is a notable event.

This year alone, Anish Kapoor’s works were hosted in the Gallery of Honour, opposite Rembrandt’s The Jewish Bride and The Syndics; and a newly acquired wedding portrait by Rembrandt, known affectionately as Maarten en Oopjen, was displayed adjacent to Rembrandt’s The Night Watch before its planned restoration. Since August, the Gallery of Honour has also hosted The Last Judgement (1526-1527). For the next two years the Rijksmuseum will be home to this altarpiece by Lucas van Leyden (1491-1533). The work has rarely been seen outside of Leiden, where it typically resides at the Museum de Lakenhal, which begins major renovation and expansion this year.

Lucas van Leyden is an important piece in the puzzle during the Netherlands’ transition from Medieval to Northern Renaissance motifs and styles. He was the apprentice of Cornelis Engebrechtsz, among the first significant painters from Leiden, who is mostly known for his devotional imagery; he was in conta 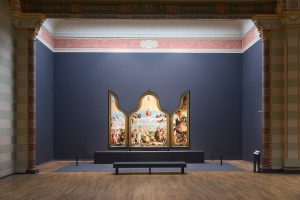 ct with artists such as the famous German printmaker, Albrecht Dürer, who influenced van Leyden with his modelling of figures and his compositions; and he drew his inspiration for anatomically correct depictions of human bodies from Italian Renaissance artists such as Raphael. Van Leyden was also a pioneer in crafting narrative in his artworks, which is also evident in The Last Judgement, in which he depicts believers and sinners with angels or demons ushering them towards heaven or hell upon their death.

The Last Judgement is typically viewed as Lucas van Leyden’s most important and impressive work. Van Leyden gained prominence during the Northern Renaissance as a talented printmaker and engraver; however, he painted the triptych, The Last Judgement—one of the three altarpieces that he painted— near the end of his life and career (he died at the young of 39 from tuberculosis) and it has since gained much art historical clout. Another of van Leyden’s altarpieces, The Dance around the Golden Calf  (ca. 1530), is part of the Rijksmuseum’s permanent collection and can be seen in the rooms on the Middle Ages and Renaissance, precursors to the Dutch Golden Age artists whose works are typically displayed in the Gallery of Honour.

The Last Judgement was commissioned by the Catholic Church of St. Peter in Leiden in the 1520s. Due to the conflict between the Netherlands and the Spanish Kingdom, however, which was initiated largely due to Spain’s imposition of the Inquisition in the Dutch provinces, Iconoclasm endangered The Last Judgement and many other Catholic works in churches and elsewhere throughout the country. After years of suppressed Protestantism and Judaism, the Dutch lashed out against Catholicism as they gained their independence from the Spanish, often damaging or removing religious images, in general, but Catholic images specifically. In order to save The Last Judgement, the city authorities of Leiden captured the altarpiece and it has since been in the hands of the municipality. Since 1874, the altarpiece has been on display at the Museum de Lakenhal, in cooperation with the municipal collections.

For many tourists to the Netherlands, the scope of Dutch history and art history is relatively limited to the likes of Amsterdam or perhaps Haarlem and The Hague. The exhibition of this Leiden masterpiece provides a unique opportunity for Amsterdam’s visitors to have a sneak peek at masterworks from other areas of the Netherlands; notably, Leiden, which is also the hometown and birthplace of Rembrandt, who owned a complete set of van Leyden’s prints and likely saw this van Leyden altarpiece in his youth.

In the last 450 years, The Last Judgement has only left Leiden twice—during World War II, it was hidden in Limburg; and it was exhibited once at the Rijksmuseum in 1958, punctuating this historic moment in which it is displayed at the Rijksmuseum.

You can see The Last Judgement in the Rijksmuseum’s Gallery of Honour from 23 August 2016 until 23 August 2018. To book a private tour of the museum with one of our expert guides, please click here.