‘At Home in Holland. Vermeer and his Contemporaries from the British Royal Collection’

At Home in Holland: Vermeer and his Contemporaries from the British Royal Collection
29 September 2016 – 8 January 2017 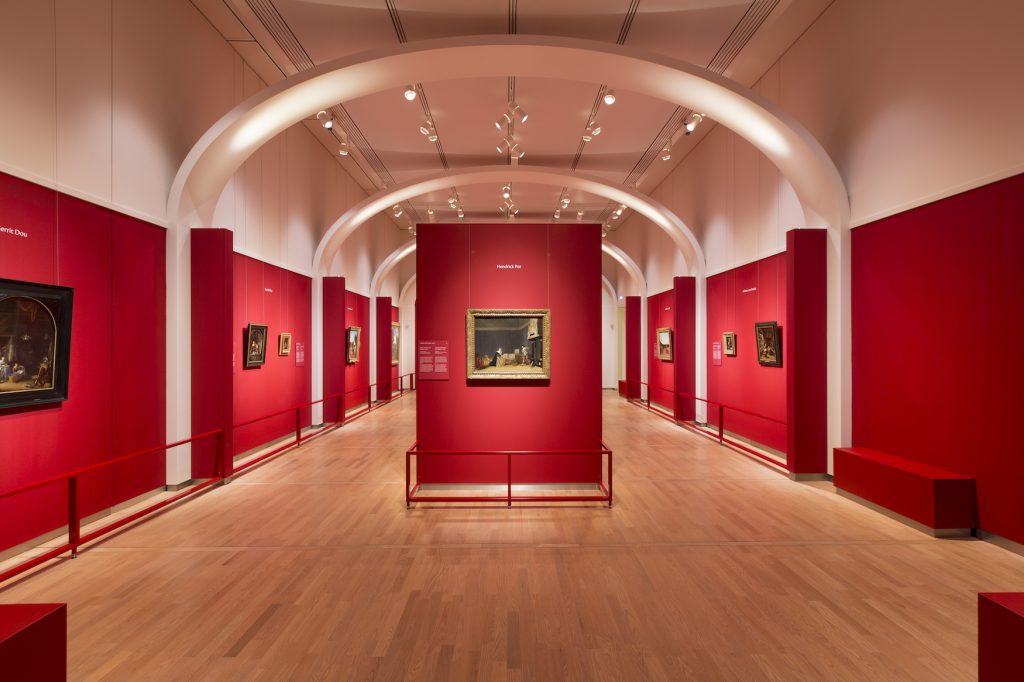 This autumn, at the Mauritshuis, we are welcoming back a select number of Dutch 17th century Masterpieces from the British Royal collection. It is a unique show, for her Majesty the Queen Elizabeth II is very fond of her Dutch collection and the British Royal family have never before allowed so many works to leave the country. The public will be delighted by the quality of painters like Steen, Vermeer and Dou, who was by the way more appreciated than Rembrandt in his day.

Many of today’s art collections once belonged to a royal family; the collection at the Prado, the Louvre and even our own Mauritshuis (the original name of the museum is the Royal Picture Gallery!) The British Royal Collection is one of the largest collections which is still intact and still owned by a royal family. It was King George IV in particular, who spent astonishing sums of money collecting Dutch art in the 19th century. These works of art are scattered around the countryside of the UK in the Royal Palaces, the most famous of these being Buckingham Palace, Windsor Castle and Holyroodhouse in Edinburgh. The British Royal Collection can boast 8000 pieces, whereas the Mauritshuis only has 800.

As far as Dutch 17th Century art is concerned, the British royals seem to have had a preference and fondness for scenes of everyday life, and in particular comic scenes. These genre pieces, as we call them, feature Dutch folk chopping onions, selling grapes, or fighting in front of an inn. Also popular were the scenes with a sexual connotation. Rich townspeople, and maybe also King George himself, will have amused themselves and their company with these naughty and comic scenes. 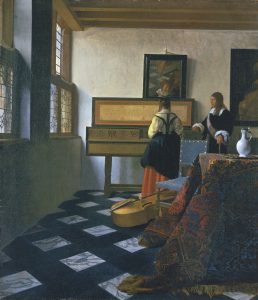 Lady at the Virginals with a Gentleman (‘The Music Lesson’) by Johannes Vermeer. On loan to the Mauritshuis collection, The Hague.

Many of these 17th Century  scenes – which were not only amazingly well painted – had a moralistic meaning which often remains quite hidden for the modern viewer. Gerard Terborch, for instance, painted scenes with moralistic messages which were not always immediately clear, not even for his contemporaries. One of the highlights in this exhibition is also such a puzzling piece: The Music Lesson by Johannes Vermeer. This work was bought by George III in 1762 and shows a lady and a gentleman at a virginal. The room is lit by the stained glass windows from the left, there is a chequered black and white marble floor, and on the right we see a table covered by a Persian rug. The warm colours of the rug contrast beautifully with the brilliant white jug placed on the rug, Against the back wall we see the two figures standing near a virginal, a sort of piano. When we look closely at the painting we see that the lady is looking in front of her, but her reflection in the mirror, which hangs against the back wall, shows a different position: she is looking at the man standing next to the virginal. Why did Vermeer do this, what was he suggesting? Or should we forget about these presupposed hidden meanings and simply enjoy the beautiful perspective, light and colours for what they are? 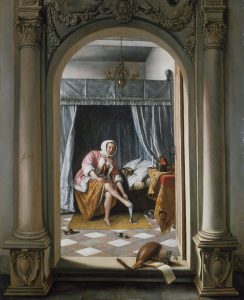 Subtleness is certainly not to be found in the works by Jan Steen. He usually is not so secretive in showing the meaning of the painting, it more like ‘what you see is what you get’. My favourite is Woman at her Toilet. As a voyeur we look through an arched doorway, very richly decorated with garlands and Corinthian columns, and we see a lady sitting on a canopy bed. Once again a chequered floor, this time black, white and red, leading up to the bed with a floor mat and again a table with a Persian rug on the right. All this is painted with sublime technique and beautiful colours, but the scene distracts you from this. The lady is taking off her stocking and the marks above her calves show she has worn them all day. Is she smiling at us as if we were her customer walking out of the room and glancing back one more time?
This work by Jan Steen, and the 22 other works in the exhibition, offers us just a glimpse of the magnitude of the British Royal Collection – this exhibition is an opportunity not be missed! Go and see ‘At Home in Holland: Vermeer and his Contemporaries from the British Royal Collection’ at the Mauritshuis in The Hague from 29 of September until 8 of January next year. If you are interested in finding out more about these hidden meanings, join us for a private guided tour in English. Contact us for more details. 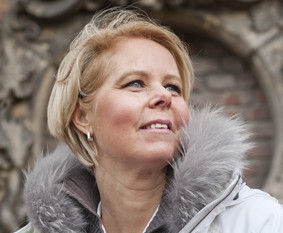 Art historian Wendy Fossen holds degrees of the Universities of Leiden, Amsterdam and Canterbury, UK. Wendy teaches art history in Dutch and English and works as a museum guide for Thinking Museum as well as at the Mauritshuis and the Gemeentemuseum in The Hague. When she is not at home, she works as a tour guide in Italy for SRC Cultuurreizen and SNP Wandelvakanties.  For more information please take a look at Casa dell’Arte’s website.