Although art theft seems like something you would only see in films, it is not a totally uncommon event. In 2002 — within the space of just a few minutes — thieves stole two early paintings by Vincent van Gogh from the Van Gogh Museum in Amsterdam. Several years later, the Van Gogh Museum and experts in the global art world had pretty much lost hope that they would be restored to their rightful home in Amsterdam.

However, the Italian police unexpectedly stumbled upon the two paintings in 2016 while investigating and tracking down members of the drug trafficking Camorra clan. Collaboration between the Dutch and Italian authorities has since ensured the swift return of these paintings to Amsterdam. The Camorra clan were not the ones to steal the paintings originally – two individuals were convicted of that crime and sentenced to 3 years in prison with a 350.000 euro fine to the Dutch government.

Supposedly, the paintings were purchased by the Camorra clan so that the clan boss, Rafaelle Imperiale, could use them to bargain his prison sentence with the Italian authorities; by revealing the location of the Van Gogh paintings to the Italian police, he was able to decrease his prison sentence for drug trafficking from 20 to 12 years, but he remains a fugitive in Dubai.

These two paintings — View of the Sea at Scheveningen (1882) and Congregation Leaving the Reformed Church in Nuenen (1884) — are some of the earliest Van Gogh paintings owned by the Van Gogh Museum, rounding out his Dutch period on the first floor of the museum. As Van Gogh was more committed to drawing at the beginning of his career, View of the Sea at Scheveningen (1882) is truly one of his first independent paintings. This glimpse into the early paintings of Van Gogh’s career provides insight into the impact of Rembrandt and Realism on Van Gogh’s early works and supplies context for his later, brighter, and more colourful paintings. 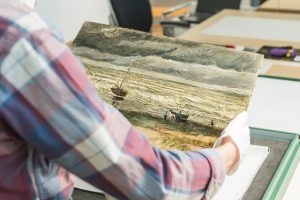 View of the Sea at Scheveningen being unpacked

After 14 years away from home, on 21 March 2017 the paintings were once again hung in the permanent collection. They are hung in the state in which they were found — without frames, and slightly damaged: it is thought that the frames were removed by the burglars at the Van Gogh Museum in order to smuggle them out more easily. The visible damage likely occurred during the burglary itself rather than later mishandling.

These paintings will be on display in the permanent collection until 14 May, when they will be examined and restored. Make sure that you see them whilst you have the chance – book a private tour at the Van Gogh museum today!