A Peek at Dutch (Art) History at the Stedelijk Museum

The Stedelijk Museum has acted as a key supporter of contemporary art in general—commissioning the first Richard Serra piece intended for public space, for example—, but has also played a particularly important role in the stimulation of Dutch contemporary art. The museum, for example, commissioned the work of Ed van der Elsken, the preeminent Dutch photographer of the 20th century, and later organised a retrospective of his work.

Despite the international nature of the collection and exhibitions at the Stedelijk Museum, there are undoubtedly a significant number of Dutch works on display at any given moment. One of these – the Appel Wall, a mural made by the Dutch artist Karel Appel (1921-2006) – is permanently on view and embedded in the walls of one of the galleries. 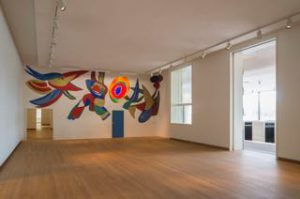 The colourful composition—consisting of a bird, a human figure, and a flower—could barely be contained within one wall. This former restaurant space has since been converted into a gallery and greets visitors as they enter one of the main galleries on the right hand side of the museum.

Appel is known as one of the founders of the CoBrA art movement in 1948, of which the Stedelijk museum has a distinctive collection. The CoBrA movement included risk-taking artists from Copenhagen, Brussels, and Amsterdam (hence, the name CoBrA), but was founded mainly by Dutch and Belgian artists, whose work, although not warmly welcome in the Netherlands, found favour in Denmark. In its typical artist-supporting, experimental fashion, the Stedelijk Museum held the first major exhibition of CoBrA art in 1949 under the title ‘International Experimental Art’, which caused much public disturbance and, after one night of poetry reading, a public brawl. 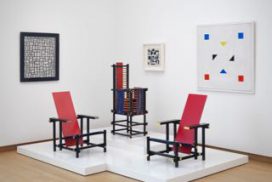 Aside from its respectable CoBRA collection, the Stedelijk Museum is among one of the most significant holders of De Stijl artwork. This art and design movement—of which Piet Mondrian is the most famous—is characterised by its linear or geometric style and its focus on primary colours. The collection at the Stedelijk Museum includes key pieces by Theo van Doesburg and famed Dutch architect and designer Gerrit Rietveld.

Finally, furnishings from the Amsterdam School, an architectural movement of the early 20th century are also found in the Stedelijk Museum. The movement’s goal was also to create an architectural experience, blending interior with exterior; thus, furniture design uniquely reflects many of the characteristics of the architecture. Founded on socialist ideals—the architects often constructed residential buildings for the working class, government institutions, and schools— the Amsterdam School-style furniture served to expose factory workers or government employees to art on a daily basis, with the idea that this would improve their daily lives. Although Amsterdam School furniture often resembles Art Deco of the same period, the design is unique to Amsterdam because Amsterdam’s multicultural society influenced it with motifs from Japan, Indonesia, and Sweden.

The beloved former director (1945-1963) of the Stedelijk Museum, Willem Sandberg (1897-1984), was essential in moulding the Stedelijk Museum into what it is today. During his tenure as director, Sandberg sought to ‘open’ the museum, which he did by constructing a restaurant, opening a library available to the public, and initiating the establishment of educational activities for children. To this day, the Family Lab—a room in which children and families can make art inspired by the surrounding collections—is central to the Stedelijk Museum.

Today, the Stedelijk Contemporary program ensures that young artists are represented in the museum, both by organising temporary exhibitions of their work as well as by commissioning works by these emerging artists and collecting their works into the permanent collection. In this way, the Stedelijk Museum collection is very dynamic and energetic, and continues to contribute to the formation of innovative art and artists on a global scale.

The Stedelijk Museum reveals the tumultuous and energetic recent past of Dutch history and art as well as continuing to support the development of emerging artistic talent both at home and abroad. The changing exhibitions and permanent collection are an exciting glimpse into the development of Dutch and international modern and contemporary art.